Chloe Adams dreams of leaving her hometown but is stuck in a custody battle for her little brother.

Isaac Williams is the valedictorian with a full ride to the University of North Dakota, whose older brother keeps Isaac close, and his secrets closer.

Chloe and Isaac both strive for a future better than the present. Their lives are beginning to head in the right direction when things take a turn for the worse. People are mysteriously taking on opposite personalities, doing things they never would have done before, ranging from petty fights to attempted murder.

As the situation rapidly escalates, Chloe and Isaac are faced with the possibility that their issues are not the result of a worldly cause, but a supernatural one.Whoever, or whatever this monster may be, it is determined to tear their small town apart and drag them down with it.

Order thirty-seven goes to table sixty-three, and why the tables and order numbers never aligned, well, it was one of the few things Chloe didn’t have an answer to. She did know, however, why she had to suffer the pain of this wretched system: her boss was an old and jaded man who gave zero squats about his employees and hated change. He was an understanding man who fired one of Chloe’s co-workers for getting the flu and hired another because he had nice tattoos. But, he wasn’t the only one in Grand Heights that hated change. The Mayor refused to change the 1940s style of his own home and made it illegal for anyone else on his street to change theirs either and claimed it was due to a lack of funding. All of which was questionable activity for a Mayor, but due to the fact that it was North Dakota, people like the Mayor and Chloe’s boss were able to do stupid, questionable things.

The one place that did actually follow the law in the town was The Home of the Creator’s Children, the group home that Chloe had lived in till she was eighteen, considering she was currently the ripe age of twenty. Most of Chloe’s friends had skipped town when they turned eighteen, getting as far away as possible to make a new life, to not be known as “the Orphan”. Chloe would have done the same, except she had one connection that kept her in town: her eleven year old brother, Tommy. Chloe had gotten custody of him when she was nineteen, and he’d been living with her for the last eight months. Child Protective Services required that Chloe had a stable job, home, and kept a clean record in order to have custody of him. There was no way inExileChloe was going to take him away from his friends at school and throw his life into shambles again just to get herself out of this town. She wanted to provide him a sense of stability. So, that was why Chloe stayed in this stupid town, worked her stupid job, and sighed as she passed the Mayor’s street on her walk back to her shoddy apartment.

Chloe pressed her hands against her forehead, leaning against the counter with her head throbbing. Her shift would be over in five minutes, and after that she had the twenty-minute walk home, thirty minutes to get changed, and another thirty minutes until Tommy got home from school and needed help with his school work.

“Adams!” Chloe’s head jerked up as her manager barked at her, “Get out there! You’ve still got five minutes to work, so work!”

Chloe frowned heavily but watched as the manager’s eyes flickered in the other direction, where their boss was shouting in his office. She nodded after a moment and went to clean her last table before her shift was up. She hummed under her breath, her focus slipping to the clock as she picked up her tip and shoved it into her pocket. Chloe winked at her manager and relished in the fact that the jumpy little man relaxed and smiled a bit. She tossed her apron in the back and quickly brushed her way out the back door.

Chloe heard the thump of a familiar pair of dress shoes and an air of physical sarcasm and wit from behind her, and rather than turning, she merely smiled. “Heya, Gabriel.”

She was grabbed from behind and spun around, her brown eyes being forced to meet unnaturally gold ones. Gabriel grinned widely, his white teeth flashing as he playfully batted Chloe with a golden wing. “I don't need to beat anyone?”

“No promises,” Chloe said. While nearly everyone in Grand Heights was against change, Chloe thrived upon it. Things were always changing because of her best friend, Gabriel. He was a grinning and cheerful being of the Creator—a Celestial. Not only was he a Celestial, he was a Primary Celestial, one of five. He had three brothers and one sister: Alexander, Raphael, Cassiel and Lucille, or Ellie, as Gabriel called her. Gabriel was the only one Chloe had ever met, but Gabriel told plenty of stories about his family.

Gabriel brushed his dirty blond hair back from his face, glancing at Chloe again. “Want me to fly you home?”

Chloe shook her head. “I like the walk. Well, that’s not exactly true, but I can’t just go poofing from place to place, G. Besides, every street on the way to my apartment has security cams.”

“I could turn you invisible like I am,” Gabriel offered, but Chloe denied again.

“You never know when you need an alibi,” Chloe said dryly. “Now, come on, lazy wings. You're gonna walk with me.”

“Wouldn't dream of doing anything else,” Gabriel said.

Get more information on the upcoming Adams & Williams series here. 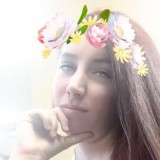 Faith Dolan is an award-winning mixed media artist and passionate writer. Her award-winning debut novel, Adams & Williams: The Skinwalker, was released in 2018.

Where to Find Me